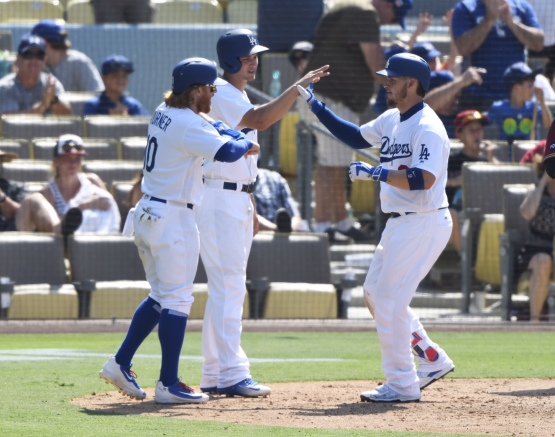 Throughout July, Dodger bats and relievers had carried Los Angeles through their first full month without Clayton Kershaw. On the final day before August, they summed it up in one rollicking package.

END_OF_DOCUMENT_TOKEN_TO_BE_REPLACED

One month and four days since his last game for the Dodgers, Kiké Hernandez has been activated from the disabled list, where he has been recovering from left rib cage inflammation.

To make room on the 25-man roster, Austin Barnes has been optioned to Triple-A Oklahoma City. Barnes doubled in four at-bats during his most recent stint with the Dodgers.

Hernandez has a .280 on-base percentage while slugging .346 this season for Los Angeles.

In other recent news for the Dodgers, who scored runs in the seventh and ninth innings Saturday but fell to Arizona, 4-2 …

END_OF_DOCUMENT_TOKEN_TO_BE_REPLACED

Grandal, whose steal came in his 191st game as a Dodger, did have three thefts with the Padres in 2014. Nevertheless, to say this week’s sequence of events was unusual is an understatement.

END_OF_DOCUMENT_TOKEN_TO_BE_REPLACED

Dave Roberts: The best win of the season 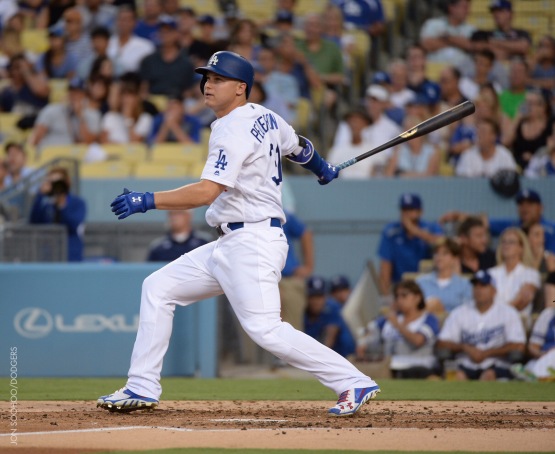 You did it again.

You played with our emotions.

After a seven-run top of the seventh inning by the Arizona Diamondbacks in which the Dodgers used five pitchers, Dodger Stadium had to be the angriest place in Los Angeles. It was a long, drawn-out, painful frame.

The Dodgers’ bottom of the seventh was medicinal. And it was sudden.

Joc Pederson’s 110 MPH two-run home run started a comeback that erased a 7-3 deficit and turned it into a 9-7 Dodger victory.

END_OF_DOCUMENT_TOKEN_TO_BE_REPLACED

Yasiel Puig remains listed on the Dodger lineup card as a reserve, but for the seventh straight game, he is not starting.

Puig’s last start came July 20 at Washington. He then had a scheduled off day July 21 but came off the bench and felt tightness in his right hamstring while trying to beat out a hit in his only at-bat of the game.

He has made one pinch-hitting appearance since, on July 22. Counting Thursday’s off day, Puig has been out of action for six days entering tonight’s game.

The 25-year-old has a .384 on-base percentage and .412 slugging percentage in 99 plate appearances since returning June 21 from a stint on the disabled list because of his left hamstring.

Andrew Toles, profiled Thursday by J.P. Hoornstra of the Daily News, is starting for the fifth time in seven games since Puig’s last start. Toles is 9 for 31 with three walks for a .353 on-base percentage in the first 34 plate appearances of his Major League career.

END_OF_DOCUMENT_TOKEN_TO_BE_REPLACED

Today is the 20th anniversary of Tommy Lasorda tearfully walking away from his dream job, although the description and duties always varied by the hour.

END_OF_DOCUMENT_TOKEN_TO_BE_REPLACED

A landslide of emotion for Vin Scully at LADF gala

Stevie Nicks said she was backstage Thursday during the Los Angeles Dodger Foundation’s Blue Diamond Gala when she began to think about time. Nicks started performing with Mick Fleetwood nearly 50 years ago, and the years were something to contemplate.

And then her thoughts turned to Vin Scully, the night’s honoree whom the members of Fleetwood Mac met before their performance began, and his 67 seasons of service to the Dodgers, and she was blown away.

Nicks then dedicated the ballad “Landslide” to the Dodgers’ Hall of Fame announcer.

Well, I’ve been afraid of changin’
‘Cause I built my life around you
But time makes you bolder
Children get older
I’m getting older too

END_OF_DOCUMENT_TOKEN_TO_BE_REPLACED

Highlights from the Dodger farm system for July 27, including a first inning grand-slam …

END_OF_DOCUMENT_TOKEN_TO_BE_REPLACED

Trivia: 100-inning pitchers and the Dodgers

It’s always good to have a Kenta Maeda stunt double on reserve.

Among the rarities of this Dodger season, it’s increasingly likely the 2016 team will have only three pitchers finish the year with at least 100 innings — the lowest number in franchise history.

END_OF_DOCUMENT_TOKEN_TO_BE_REPLACED

Dodger significant others volunteered for a day of service Wednesday at the Downtown Women’s Center, which aims to combat homelessness with living arrangements, food and job connections. Read more about it in Jack Baer’s story for MLB.com.