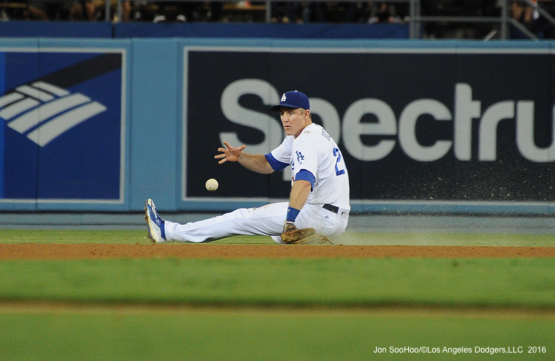 Chase Utley was selected as the recipient of the Dodgers’ 2016 Roy Campanella Award — which is voted on by Dodger players and coaches.

The Campanella Award is given to the Dodgers player who best exemplifies the spirit and leadership of the late Hall of Fame catcher. 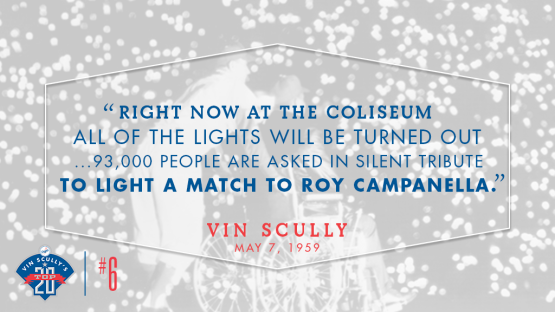 Between now and Vin Scully Appreciation Day on September 23, the Dodgers are revealing the results of the fan vote ranking Scully’s top 20 Dodger calls of all time, one at each home game. Here’s No. 6: the 1959 Coliseum tribute to Roy Campanella. 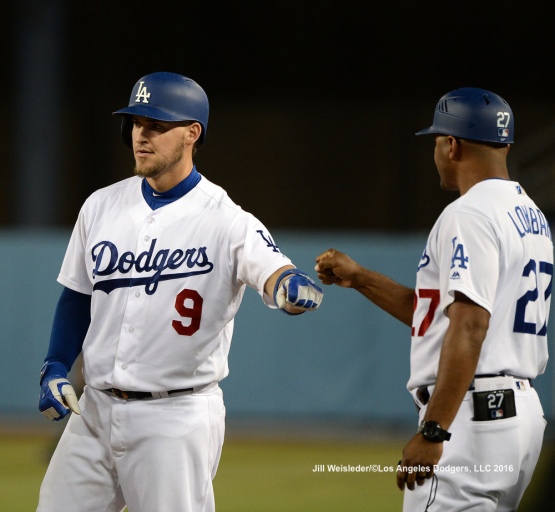 Grandal, whose steal came in his 191st game as a Dodger, did have three thefts with the Padres in 2014. Nevertheless, to say this week’s sequence of events was unusual is an understatement.

END_OF_DOCUMENT_TOKEN_TO_BE_REPLACED

In case you missed it: Kool Kenley 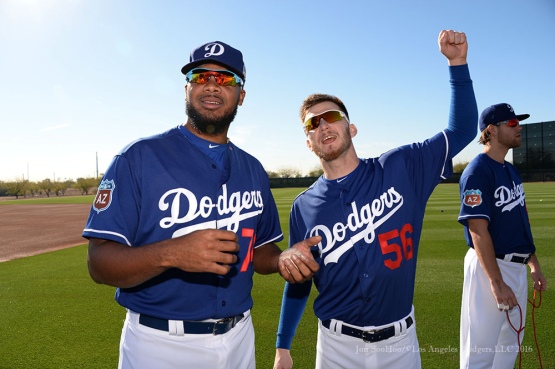 For more images from today, visit the Dodgers Photog Blog. 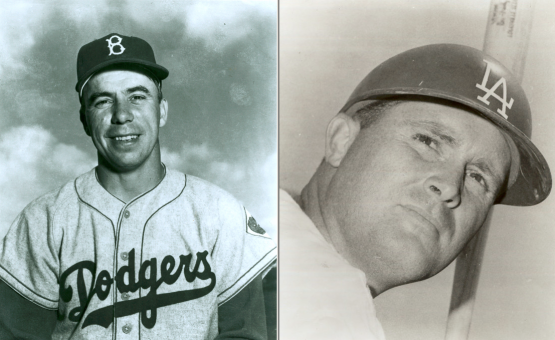 With the Dodgers celebrating their 10 retired numbers in a pin series this year, I was curious who was the last active player to take the field with each of these legends. Here’s what I found:

1 Pee Wee Reese
Ron Fairly, who was 19 when making his debut with the 40-year-old Reese as a teammate on the 1958 “Welcome to Los Angeles” Dodgers, was 40 himself when he played his last big-league game in 1978. Years between Reese’s first game and Fairly’s last: 38

END_OF_DOCUMENT_TOKEN_TO_BE_REPLACED 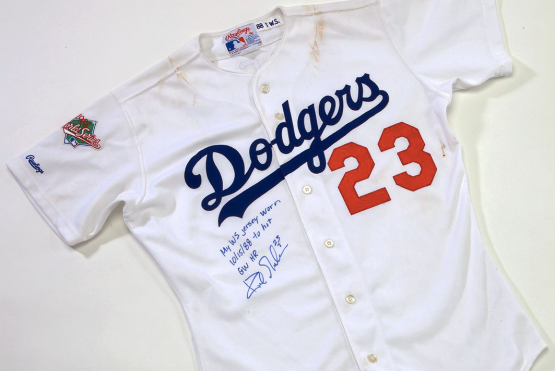 What is the most valuable piece of Dodger memorabilia?

END_OF_DOCUMENT_TOKEN_TO_BE_REPLACED 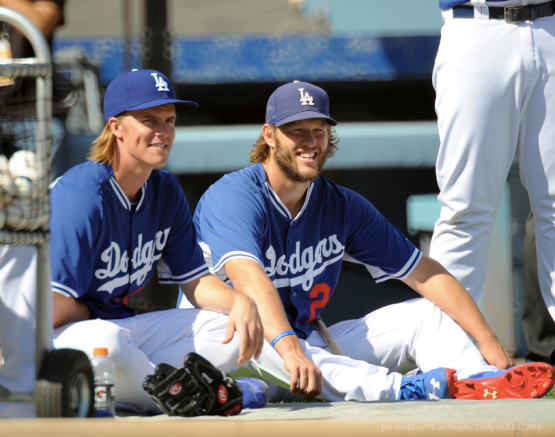 Maybe this is part of my own healing writing this.

I grew up during the time of Tony Gwynn and Cal Ripken. One man has a statue outside of Petco Park that reads “Mr. Padre.” The other is arguably more significant to the city of Baltimore than Edgar Allen Poe.

They were the ideal Major Leaguers to me — players who were stars, who you never feared would be traded or leave as a free agent. Players who started and ended their baseball careers in the same place. 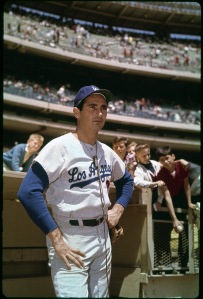 Sandy Koufax poses for a portrait circa 1962. Photo by Louis Requena/MLB Photos

Before them, Ted Williams was only a Red Sock, Mickey Mantle and Joe DiMaggio were only Yankees, and Jackie Robinson, Roy Campanella, Sandy Koufax and Don Drysdale were only Dodgers. And the thought of them in any other uniform is sacrilegious.

But I learned that they are the exception and not the rule. More often than not, our favorite players eventually end up leaving our favorite teams. And it’s not easy to stomach.

I hurt when Mike Piazza was traded. I was sad to see some recent players go. And I mentioned earlier that I grew up during the Gwynn-Ripken era. That was also the same period when I saw Orel Hershiser wear a Giants uniform and Fernando Valenzuela was an Angel and a Padre.

Now we’re in a more urgent era, where there is more equity in baseball, and competition off the field makes the game ever-evolving. Hence, the following:

There are only four players in the big leagues who have been on the same team since 2004 — Joe Mauer, David Wright, Ryan Howard and Yadier Molina. And there are no players from the 2011 Padres, Diamondbacks or Cubs who are on their current rosters.

From that 2011 season, only Andre Ethier, Clayton Kershaw, A.J. Ellis and Kenley Jansen remain on the Dodgers. Since 2006, Ethier’s first season, he has played the most games of any Major League outfielder for the same team. Every outfielder in the top 10 games played since 2006 has played on at least two teams. Only four National League starters have been with their team longer than Kershaw — Adam Wainwright (St. Louis, 2005), Matt Cain (San Francisco, 2005), Homer Bailey (Cincinnati, 2007) and free agent Tim Lincecum (San Francisco, 2007).

With that urgency brings a thinner line between risk and reward. Maybe the following shows that a free agent’s team knows him best — and therefore has a more difficult decision on what it wants to do when a player comes up for free agency.

Top-level free agents over the age of 30 typically don’t re-sign with their teams. In the 2013 and 2014 offseasons, 56 free agents who were age 30 or older and had been All-Stars at some point in their career signed Major League contracts. Of those 56, just 10 re-signed with the team they played with the year before. That’s less than 20 percent. The only player who signed a contract of more than three years was Victor Martinez, who inked a four-year deal with Detroit in 2014. Brian Wilson, who signed a two-year pact with the Dodgers, is one of the 10.

I’m not trying to destroy the idea of a player being with the same team his whole career or a major portion of it, as would have been the case if Zack Greinke had re-signed with the Dodgers. I’m just mindful that Mr. Padre and Cal Ripken longevity is uncommon.

Players who remain with the same team their whole career — like with Robinson, Campanella, Koufax, Drysdale and hopefully Kershaw — are special cases. As are players who re-sign with their team when they become a free agent.

The most famous player in baseball history is known as a Yankee, but Babe Ruth was a Red Sock first, and we know how that transaction affected people.

Will we ever get over our favorite players leaving? Some will. Others might take 86 years.

Congratulations to Zack Greinke, who today was named the winner of the 10th annual Roy Campanella Award, given to the Dodger player who best exemplifies the Hall of Famer’s spirit and leadership. Campanella’s daughter, Joni Campanella Roan, will present the award during pregame ceremonies Sunday. 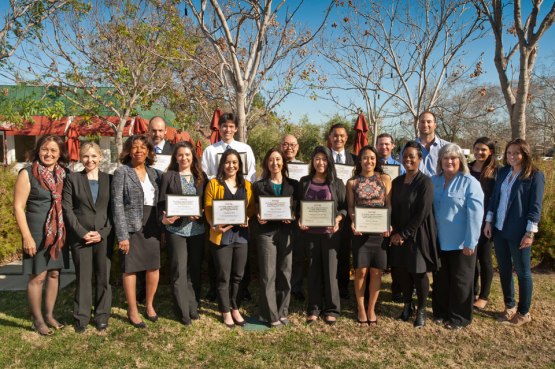 Since 2010, Dodger vice president of medical services Stan Conte has invited a Cal State Northridge physical therapy student to intern with the team’s medical staff through Spring Training. It is quite rare to have a physical therapy intern work with a professional sports team, but it also shows the strength of CSUN’s program. This year’s deserving intern will be Jared Sinn.

“I want to be the guy to make a difference in everyone’s life,” Sinn said. “If I can do that just by going to work, to me, that’s not work. It’s something I want to do every day, to go out and save the world, I guess.”

On January 23, 10 scholarship recipients gathered at a celebratory luncheon with Joni Campanella Roan (the daughter of Roy and Roxie Campanella), staff of the Los Angeles Dodgers Foundation and staff from Cal State University Northridge’s College of Health and Human Development.

END_OF_DOCUMENT_TOKEN_TO_BE_REPLACED

In case you missed it: Yasiel Puig sets the agenda at City Hall

A little inside baseball at City Hall: @YasielPuig reaches up for the throw from councilman Tom LaBonge. pic.twitter.com/bA7n3UaA8P 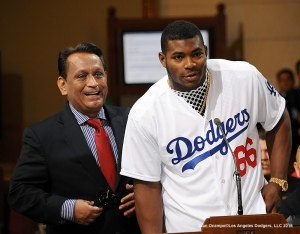 Yasiel Puig was filled with insouciant musings during today’s conclusion of the Dodgers’ Pitching in the Community caravan, and Alden Gonzalez of MLB.com captured it in an entertaining piece. Here’s an excerpt:

… Puig looked strong, but had no idea how much he weighs with 27 days left until the first full-squad workout.

“Whatever weight I come in, it doesn’t matter,” Puig said, citing teammate Juan Uribe as an example by calling him a “gordito,” exaggerating his weight and saying, “He saves us every game at third base.”

Puig also glowed about Astros 5-foot-6 second baseman Jose Altuve, his teammate for an exhibition tournament throughout Japan in November and someone he credited with inspiring him to intensify his workout regimen this offseason.

“I don’t like working out,” Puig said. “It’s like you have to pay me to enter the gym.”

But Puig did, because he wants to steal more bases and he wants to limit the highs and lows of a six-month regular season. …

So what else is going on?

Always different to see the Dodgers away from the ballpark. #DodgersCaravan pic.twitter.com/segbL6KjZn

Howie Kendrick and friends getting in shape for 2015. #DodgersCaravan https://t.co/dGQHu0eHyE