They send these graphic destructobeams at the speed of light via satellite, I hear. Fortunately, this one only sheared off the front of Clint Robinson’s helmet but left his head unscathed after his first Major League hit tonight.

Update: But would he survive a liquid attack from land? END_OF_DOCUMENT_TOKEN_TO_BE_REPLACED

One one-hitter later, and Dodgers are No. 1 in West

It was the play of the game, early in the game. With David Murphy (who had walked) on second and two out, Miguel Rojas dove to his left to flag a sharp shot up the middle by Michael Bourn off Dan Haren that had RBI stamped and scribbled all over it.

Rojas jumped to his feet and threw to first, and Bourn was called out.

The bad news for the Dodgers: Upon further review, the call was reversed.

The good news for the Dodgers: Cleveland had no more baserunners the rest of the game.

Yes, there but for the grace of replay went the Dodgers’ third no-hitter in six weeks. Really.

But there, thanks to the grace of Clint Robinson, the Dodgers moved into first place in the National League West for the first time since April 24.

Coming to the plate in a scoreless game in the bottom of the seventh inning, after Andre Ethier had tripled with none out and pinch-hitter Hanley Ramirez had been intentionally walked with two out, Robinson grounded a 3-2 pitch almost to the same spot that Bourn hit his ball, but this – Robinson’s first Major League hit – had enough moxie to get through for the RBI that gave the Dodgers a 1-0 victory over Cleveland.

Robinson was batting for Haren, who faced 23 batters and retired all but the aforementioned two, striking out five. Brian Wilson and Kenley Jansen were perfect in closing out the game.

And the Dodgers have won 16 of their past 22 games, gaining 10 games on San Francisco in 22 days.

June has been kind to many Dodgers, but on the hitting side, particularly so to Matt Kemp.

Since his OPS fell to .719 on May 30, its lowest point since the second game of the season, Kemp has been OPSing .905 (.381 on-base percentage and .525 slugging percentage). He leads the Dodgers in total bases for the month of June with 51.

Has Kemp been a changed hitter? Maybe. On the other hand, remember when I wrote how Kemp had the best batting average on balls in play in Dodger history, but that early in 2014, it was abnormally low? Well, take a look at the following:

For the year, Kemp’s BABIP is .352 — which exactly matches his career average. 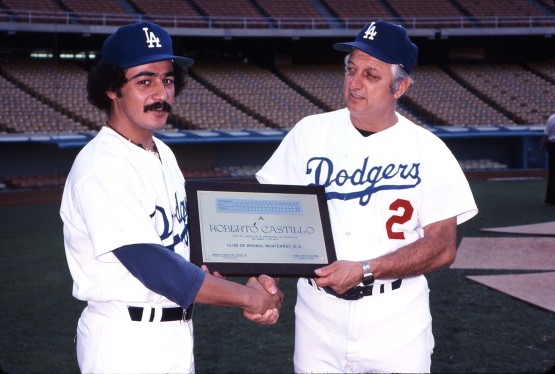 The passing of former Dodger pitcher Bobby Castillo at age 59 today, after a battle with cancer, brings to mind the one pitch that changed his life and set in motion one of the most memorable chapters in Southern California baseball history.

The scene wasn’t Dodger Stadium, where Castillo attended games as a youngster and rooted for Hall of Fame pitcher Sandy Koufax. His watershed moment occurred in 1975 during a semipro game at Evergreen Park in East Los Angeles. The primary characters were Mike Brito, a first baseman for the Latin Stars and a Mexican League scout, and Castillo, a third baseman from nearby Lincoln High School who had been released by the Kansas City Royals organization.

Brito came to the plate in the eighth inning with the bases loaded and his team trailing, 2-1. Castillo was brought in to pitch, and Brito sized the 5-foot-10, 170-pounder with great anticipation.

END_OF_DOCUMENT_TOKEN_TO_BE_REPLACED

Dee Gordon’s lead in the Major League stolen base race, which was 14 when June began, is down to only four. And yet, his case for making the National League All-Star team as a reserve has perhaps never been stronger.

Thanks in no small part to becoming the first player since Ray Chapman in 1917 to have four consecutive multisteal games, Houston’s Jose Altuve has nearly flagged down Flash Jr., who has one steal since June 21. And Cincinnati’s Billy Hamilton has made up nearly as much ground.

The Irony Committee notes that this has been happening while Gordon has had a rock-solid month at the plate, with a .316 batting average, .371 on-base percentage (including eight walks) and .495 slugging percentage. However, after success in 34 of his first 37 steal attempts this year, Gordon has only been safe in six of his past 11.

Nevertheless, Gordon has moved up to second place in Wins Above Replacement among NL second basemen, according to Fangraphs, trailing only position voting leader Chase Utley of Philadelphia. Gordon is rated the No. 1 offensive second baseman in the league and No. 1 at baserunner, and league average on defense (frequent spectacular plays notwithstanding).

The Mets’ Daniel Murphy and Brewers’ Scooter Gennett, neither of whom have any more of an All-Star pedigree than Gordon, are ranked third and fourth at second base by Fangraphs behind Gordon.

In short, by continuing to hone all aspects of his game, Gordon has become every bit the legitimate candidate to join the NL team in Minnesota in two weeks.

I go to the stadium.

I come up close.

You don’t even know.

Because when we win …

Technically, the Giants remain in first place in the National League West. By .001. If you want to be technical.

Either way, go ahead and say that the Dodgers have erased a 9 1/2-game deficit in the National League West for the second consecutive season – and have done so in 20 games, even more quickly than the 25 games it took in 2013.

They did so by pummeling the St. Louis Cardinals for the second consecutive day, 6-0, with Andre Ethier’s three-run homer – his first tater trot in more than a month – in the fifth inning providing the crowning blow behind the continued unparalleled efforts of Clayton Kershaw.

It took the Dodgers until the fourth inning to get their offense going, and in fact, it took a shift-defying bunt single by Adrian Gonzalez to generate their first hit off Cardinals righty Shelby Miller.

Gonzalez’s effort moved Yasiel Puig, who had walked, to second base, before Matt Kemp singled in the first run and Juan Uribe hit a sacrifice fly for the second.

In the fifth, Puig doubled, Gonzalez singled and Kemp doubled ahead of Ethier’s blast. And that, as some would say, was that.

• He struck out 13, matching the highest total of his career when not pitching a no-hitter.

• He reached 100 strikeouts with fewer walks (nine) than any pitcher in Dodger history, shattering Sandy Koufax’s club mark of 19 walks for his first 100 strikeouts in 1965.

• He has fanned at least seven batters in eight straight games for the second time in career. Only Koufax (11 games in 1965) has had a longer streak for the Dodgers in Los Angeles.

• His numbers since giving up seven runs in the second inning at Arizona on May 17: 57 innings, 35 hits, eight walks, 79 strikeouts, 1.11 ERA. Seven runs in one inning, seven runs since.

He is … beyond words.

Clayton Kershaw looks to stay on roll, not get rocked by Cards

The Dodgers public relations department notes that with his current 21-inning scoreless streak, Kershaw is already within range of the top 10 streaks in Los Angeles Dodger history:

Kershaw is also aiming for the first six-win month by a Dodger starting pitcher since Hideo Nomo in 1995. If he gets that, he would have nine wins and put the Dodgers on track for a rare trifecta, Dodgers PR notes.
END_OF_DOCUMENT_TOKEN_TO_BE_REPLACED

Melissa McCarthy, joined at Dodger Stadium by husband and “Tammy” co-writer Ben Falcone, threw out the first pitch before Saturday’s Dodgers-Cardinals game. Jon SooHoo snapped several pics — some are below, while the rest can be found at LA Photog Blog.