Andrew Toles is the eye in the hurricane

Chicago is giddy with enough excitement and anticipation to spread all over the city’s famous hot dogs, if they weren’t so particular about what you put on their hot dogs.

Wrigley Field is jumping. The streets around the old ballpark are rollicking. At once confident and paranoid, Chicago is a quaking nerve brought to life, and the roar at Game 6 of the National League Championship Series will be deafening beginning with tonight’s very first pitch.

And stepping into the batters’ box for that very first pitch will be none other than Andrew Toles.

END_OF_DOCUMENT_TOKEN_TO_BE_REPLACED 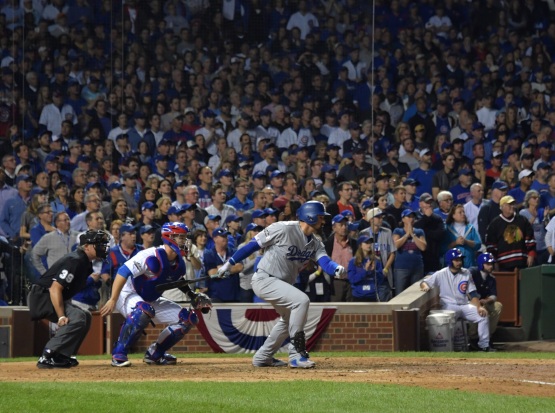 This game was nothing like it should have been, and everything it shouldn’t have been.

The Dodgers should have been buried, but weren’t. Then they could have won going away, but didn’t.

Trailing for seven innings, then tying the game in the top of the eighth with Adrián González’s two-run single off human sonic boom Aroldis Chapman, the Dodgers fell to the Chicago Cubs in Game 1 of the National League Championship Series, 8-4, after a pinch-hit grand slam by Miguel Montero off Joe Blanton.

Still hoping for a road split, Los Angeles will send Clayton Kershaw to the Wrigley Field mound Sunday for Game 2, following a night of contemplating how nearly they stole their pennant series opener.

“It stings a little bit,” Dave Roberts said. “But just the way that we kept fighting and we kept playing … I felt that our at-bats all night long were quality. I thought we were gonna win it, but we’ll be ready to go tomorrow.”

Crushing defeat for #Dodgers? Adrian Gonzalez: "This actually gives us a lot of confidence. We know we can beat them."

END_OF_DOCUMENT_TOKEN_TO_BE_REPLACED

The eighth inning and the epitome of the Dodgers

The October sky had fallen into a million pieces and landed on the field at Dodger Stadium again. A 5-2 Dodger lead heading into the seventh inning of Game 4 of the National League Division Series left the frame in a 5-5 tie. And either someone was going to sweep away those pieces, or pick them back up. Maybe you’ve seen these Dodgers before.

“If anyone gives up on this team,” Dave Roberts said after the game, “they haven’t seen us play a whole lot this year.”

In the bottom of the eighth inning, one of the game’s top relief pitchers in 2016, Washington’s Blake Treinen, got the first two outs.

END_OF_DOCUMENT_TOKEN_TO_BE_REPLACED

Dodger minor leaguers up for a slew of MiLBYS

The Dodger farm system started the season on top and fans can help make it end the season in the same spot.

Fans can vote here for the 2016 MiLBYS, the MiLB.com awards for the best of the year in the minor leagues.

END_OF_DOCUMENT_TOKEN_TO_BE_REPLACED

Though the Dodgers haven’t announced their full starting lineup for Game 1 of the National League Division Series on Friday, Dave Roberts did tell reporters today that Andrew Toles will be the left fielder.

END_OF_DOCUMENT_TOKEN_TO_BE_REPLACED

Several sizzled in September for Dodgers

Though the 2016 regular season isn’t officially over, the month of September is, a month in which several Dodger bats delivered.

Over to Pederson’s left — in right field — were two strong hitters. Josh Reddick rallied from a dismal August to tie for the NL lead in batting average (.400), alongside a .435 OBP and .569 slugging percentage. Reddick was due, to say the least — his batting average on balls in play went from .194 in August to .429 in September.

END_OF_DOCUMENT_TOKEN_TO_BE_REPLACED 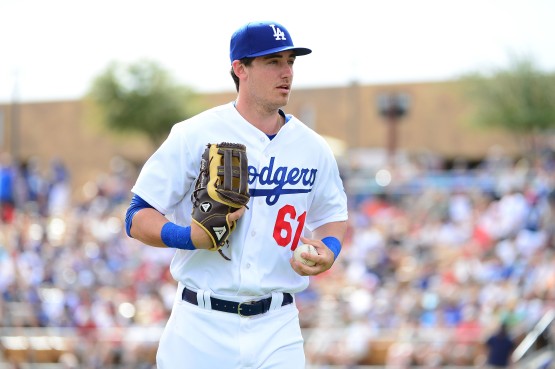 What good are baseball prospects if they don’t move?

The Dodgers came into 2016 with the top farm system in baseball across the board, according to MLB.com, Baseball America and Baseball Prospectus. They had five prospects in MLB.com’s preseason Top 100 Prospects list. And all five moved.

No. 1 overall prospect Corey Seager will, in all likelihood, be the National League Rookie of the Year. MLB.com No. 4 prospect Julio Uriás graduated from the Triple-A Oklahoma City Dodgers as a teenager and showed rapid progress in the Majors with Los Angeles. No. 24 prospect Jose De León knocked on the door so hard that the Dodgers answered in September, calling him up and watching him contribute to wins right away. In addition, the Dodgers moved No. 62 Grant Holmes and No. 95 Frankie Montas to Oakland in the deal for Rich Hill and Josh Reddick.

In all, seven Dodger minor-leaguers made their Major League debut this year. Many others raised their game, climbed the ladder and gave the Dodger farm good reason to be highly regarded next year as well.

END_OF_DOCUMENT_TOKEN_TO_BE_REPLACED

The Dodger outfield has chosen September to start asserting itself.

The trio of Josh Reddick, Howie Kendrick and Joc Pederson went a combined 5 for 10, scored seven runs, knocked in seven and reached base eight times. And in the bottom of the seventh, Reddick pounded a Christian Bergman pitch into the Rockies bullpen for a grand slam — his second homer as a Dodger.

END_OF_DOCUMENT_TOKEN_TO_BE_REPLACED

Eduardo Nunez gave the Giants another self-generated run when he homered just over Andrew Toles’ glove and off a camera housing in the fifth inning tonight, and unlike Monday, the San Francisco Giants made it stand up.

Adding an insurance run on Brandon Belt’s ninth-inning homer, the Giants came away with a 2-0 victory.

San Francisco cut the Dodgers’ lead in the National League West to five games, and perhaps more interestingly, forged a three-way tie with the Mets and Cardinals for the two available NL Wild Card spots at 80-71.

The Giants held on despite needing 3 2/3 shutout innings from their maligned bullpen, after a left groin strain forced Johnny Cueto from the game. San Francisco also lost shortstop Brandon Crawford when he dislocated his left pinky while trying to go from first to third in the second inning.

END_OF_DOCUMENT_TOKEN_TO_BE_REPLACED

Corey Seager, who among his many other achievements is on pace to break Mike Piazza’s 23-year-old Dodger rookie record for on-base percentage, was one of four Dodgers with two hits apiece in the Dodgers to a 5-2 victory over Arizona.